Coming to a close with 2021, and doing some reflection on my adventure, this blog, and the state of things. Here is the one from last year, in case you're interested.

On the personal side, and as can be inferred from the low number of posts and ideas flowing, I've been BUSY and STRESSED. This year felt like a constant heart attack, jumping from crisis to crisis, navigating this never ending pandemic and its burdens. I barely have uninterrupted free time, more than half an hour through the day. And the less gaming, bizarre media absorption, and idle regurgitation, the less productive and exciting the blog gets.

A note of pride is that the Pywawa monster I put on the blog a while ago got published in the Knock! magazine issue #2. I'm a massive fan of the publication and the work being put out by the team, excellent OSR.

Of course, my involvement in games slowed down dramatically, especially so in the second half of the year:

It is no secret. Face-to-face gaming is still burdened by difficulties for obvious reasons. I've had some slight disenchantment with the whole online gaming experience, and the difficulties of finding a reliable group with my sensibilities. So here I am. 19 posts (20 if you allow this one), and a wish to ramp up the creative front in 2022. Some of my favorites of 2021:

First, about my gaming. I want to find some regularity to it, which would also mean that my life situation settles down. The success of this is unfortunately not solely down to me. An OSR open table with a weekly cadence would be my ideal. But for that have to strike the right avenue and audience. Castle Xyntillan is one option. Rolling my own hexcrawl another. Then I might veer The Calaveras to try indie games instead of an irregular OSR affair. We shall see.

Second, I would like to ramp up the state of the blog. Despite the myriad of material out there, and my fear of being an irrelevant and callous voice, I find the act of sitting down and dumping and present ideas therapeutic. My aim is to beat the 20 posts of 2021.

Third, I want to publish some material from past games into the blog, itch, drivethrurpg, or another similar platform. This will prove hard, since as a solo show you either have to wear a ton of hats (layout, art, information design, and of course writing), or pay for it. One project that excites me is a bestiary based on my sister's illustrations.

Email ThisBlogThis!Share to TwitterShare to FacebookShare to Pinterest
Labels: ramble, year in review 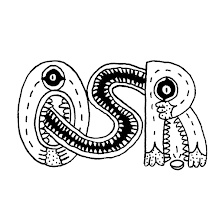