This is my attempt at taking a look and reviewing the Zinequest 2 projects I backed.
See some disclaimers at the end of this post.

They Cried Monster is a 24 page-long zine, laid out in front and back cover as singles, and 11 spreads. Two PDF variants are provided: single pages and spreads. It is black and white, with enough black ink so that printing from home could be tough. The PDF has no bookmarking or layers.
One of the biggest appeals for me to get this zine was the artwork and aesthetic, and I knew there would be monsters to mine for my campaigns. For me it sits in the category to "pick a small number of neat elements for my own game", and not something I want to apply from start to finish in a game.
Have a look at the Kickstarter campaign to get a feel of what this is. This is the 3rd zine I review where Charles Ferguson-Avery was involved. I own Into the Wyrd and Wild, which I consider a helpful toolkit for running forest-wilderness adventures. This zine touches a lot of the same notes as that supplement did. If you liked Wyrd and Wild, chances are you'll like this. The Tyrant Centipede (one of the monsters) has concept and writing credit from Jesse Martin. 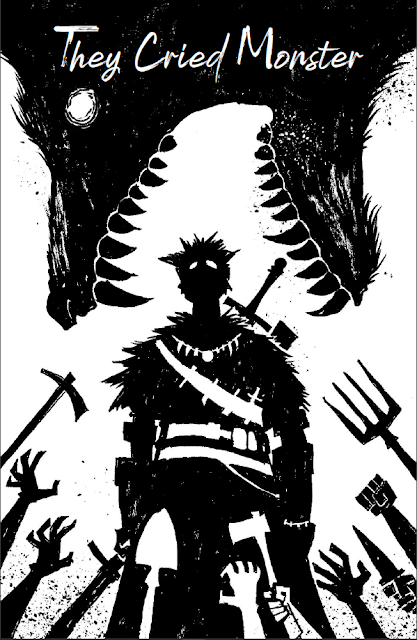 The cover perfectly summarizes the contents of They Cried Monster. There are some house rules for Hunters, which is a more heroic adventurer than we are used to see in a standard OSR game. This sits between some rules and tables for generating Settlements (a place to gather rumors and meet key NPCs), and a Bestiary with six creatures in the mid-level of play (given their HD range). I think this is a great cover, conveying the contents.
The first page of arguable content is a Using this Zine background section. References and influences are cited (The Witcher, Hellboy, Mushishi). Claims to be rules system agnostic (citing some recommendations like Knave, B/X, DCC, Troika!, 5e, etc), and frankly in my limited experience that's harder to get right than choosing a system and even loosely sticking to it.

There are essentially two proposed house rules, to make play more heroic. It will still require a proper ruleset to play with, since here we only get some dressing and optional rules to tack onto the game of choice. I think they would work better on some systems than others (Black Hack, B/X and Knave vs DCC Troika! or 5e).

It proposes slots (like Knave), and quantum equipment for mundane items (which ones count as unique? it's not clarified). Monster hunting takes some distance from the bean-counting and planning involved by equipment purchases. This is a bit conflicting for me, but I know it can produce great results at the table, depending on the group's preferences.

Then, it encourages games where the Hunter is adventuring alone. Or as the only PC, this could work well on a one player one referee situation. Collateral damage helps for that. The table of 10 Disciplines, essentially small powers/knacks, reinforces that. Descriptions evoke Witcher vibes, a big influence throughout the publication.

There are three pages on building settlement settings. A locale currently accosted by the monster, where the Hunters can help solve the pesky problem. The best part is the two random tables for prominent NPC generation, as well as community details (wealth, quirk, etc.). These provide enough to frame the skeleton of such a community. A list of names (both for people and places) would have been appreciated. We get a sample community with three such personalities, ready to be used.

A few further criticisms though. First, the population type numbers make no sense, at all. A city can at most have 150 inhabitants? Second, you're meant to track the attitude of these prominent NPCs towards the Hunter/adventuring party. But the way to do so is only mentioned in extremely broad strokes. It would require a lot of work to make this idea actionable at the table, into an actual, interesting system. Similarly, the mob mentality, while making a lot of sense and providing some guidelines, seems a bit coarse and generalist. Lastly, there is a 2d6 table for Nightly Events, but there are entries for results above 12, and I have no clue what modifiers apply to arrive to that number.

The meat and potatoes of the publication. We get six monsters, each described in a spread, fully illustrated. Fairly system neutral, with things like armor as chain, I wish we had damage also statted that way (armor as longsword, as polearm, etc.), but that's a minor nitpick. The gold values as reward seem very low for a gold for XP system like B/X, and it would be nice to know what system they're intended for. I would just adjust it with some amount per HD of the monster.
On top of the stats, we get a written description to accompany the visuals, and habits and weaknesses. These are good tools to feed to the players in rumor tables, or as prized information to defeat the foe. I like this. Escalating the conflict with the monster, which should be something spanning one or multiple session, is done in an elegant manner, providing a flowchart with 6 entries per monster, per stage. This provides context when the Hunter arrives to a new settlement of what has transpired already with the monster, before they arrived, and why the community is bothered by the creature.
The six creatures are: Bronzebeak Gryphon, Cindermander, Rivengeist, The Blaakhart, Tyrant Centipede (credited to Jesse Martin), and The Mothman. There is nothing utterly innovating here, or that couldn't be obtained with a spark of ideas. But I could see myself using these as-written in my games, or with only the slightest modifications. And again it's probably the strongest content in the zine. 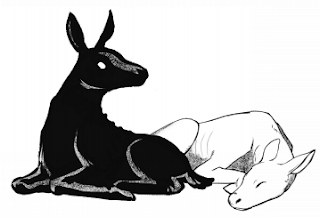 Towards the end the zine gets a few paragraphs on the intent of the work, their goal creating this product, and what kind of playstyle should be expected. There's also a decent list of music to set the mood, and a list of credits (no playtesters credited here).
Of note are also the two character sheets provided. One for the Hunter characters, with ample space for the quantum inventory. The second is to detail a settlement, write the number of inhabitants, prominent NPCs, etc. Not something I think I will ever use myself, but a nice touch nonetheless.
This concludes the review. They Cried Monster is a framework to play heroic monster-hunting adventures. It is impregnated with the influence of material like the Witcher franchise. Episodic adventures where you hunt down a monster in a session would work well. I also suspect it would play well in a one-on-one game, given the nature of the "lone-wolf" these monster-hunter narratives fall back to. It's hard to picture a traditional adventuring party.
With that said, it will require a lot of work from a skilled referee as well as an accompanying ruleset to come to live. It is bare bones, and provides some interesting rule and mechanic ideas, but they are not fleshed out at all. The best content is without doubt the monsters presented. I would think 5e (of all things) would work well with this.

- In the interest of full disclosure I bought this with my own funds.
- I was a backer on their Kickstarter campaign and paid 5 US$ for the PDF version of the product in February 2020.
- Nobody is paying for this review. All of the opinions you see are my own.
- Nobody is approving or reading this post before it goes up.
- I have no relationship with any of the authors of this product.
Posted by Agile Goatman at 9:35 PM