This session took place a long while ago, and since then the game disbanded and has been cancelled. I still wanted to put these notes here for completeness sake.

We picked things up where we left them running through Magical Murder Mansion (report to sessions 1 and 2 here). The party has explored a good portion of the mansion already, mainly on the North-West tower area. They get an interesting breakthrough during Session 3, and seem motivated to carry on exploring. 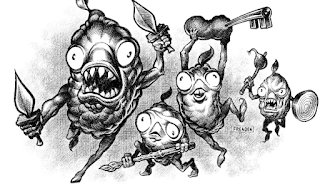 Posted by Agile Goatman at 1:29 PM